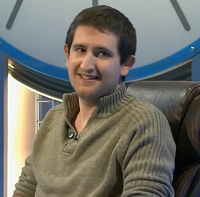 Tom Rowell was an octochamp in Series 63, and a participant in the 30th Birthday Championship.

He returned to Countdown in 2013, as one of 41 contestants taking part in the 30th Birthday Championship. After receiving a bye to the first round, he won his first match against Series 66 semi-finalist Peter Lee by a score of 92 – 84, before he lost to the runner-up of Series 66, Jonathan Rawlinson.

In 2016, Rowell appeared on Fifteen to One, notably in the same episode as Series 44 and 70 contestant Julie Devine, winning in his final appearance. Rowell was also part of the victorious Escapologists team on Series 13 of Only Connect.