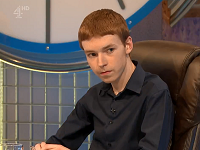 Toby McDonald solving the conundrum in his Mum's second appearance.

Toby McDonald, also known as Tobe, was an octochamp in Series 78. From Chard in Somerset, he was a 6th form college student at the time of recording. He is also an Apterite and a member of c4countdown.

Making his debut on 26 April 2018, aged 17, McDonald prevailed over three-time winner and former professional golfer Jason Palmer in an extremely close encounter, snatching the game on a crucial conundrum with both players already over 100 points. McDonald sealed another seven victories, all of which were centuries – including a top score of 121 – and garnered a cumulative score of 882 points. Notably, he declared BOATIES on three occasions. His numbers rounds, particularly, were very strong; of the 320 points available from these in his run, he accumulated a raw score of 308, placing him – at the time – equal second with Stephen Read on highest cumulative score from 32 numbers rounds in an octochamp run, behind Dylan Taylor's 311. He is the first ever octochamp born in the 21st century, having been born in January 2001.

As a result of his success in the heats, McDonald was invited back for the Series 78 finals as the No.2 seed. In his very close quarter-final, however – despite solving all the numbers rounds – he finally suffered his first defeat against six-time winner and fellow Apterite Philip Aston after an unsolved and very difficult crucial conundrum eluded both players. Nonetheless, he scored an impressive 97 points to Aston's 104, ensuring a joint score over 200 for this highly anticipated episode between two teenagers from the south-west of England.

Although he was not invited for Championship of Champions XV, McDonald has since made his Co-event debut at Bournemouth in 2018.

He is the son of Laura McDonald, who lost to seven-time winner and finalist Christine Armstrong in Series 54 and to octochamp Dave Ashton in Series 79. On her second appearance on 13 September 2018, Toby was the audience member who solved the conundrum LOADEDCON.

Away from Countdown, McDonald is a keen Nintendo video gamer and has a YouTube channel dedicated to gaming and Countdown. He also has an A* in GCSE German.

Retrieved from "https://wiki.apterous.org/Toby_McDonald"
Categories: Contestants in Series 78 | Teapot owners | Octochamps of the 15 round era | Finalists