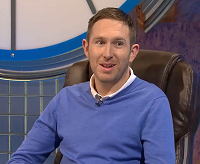 Jason Palmer as a professional golfer.

Jason Palmer was a contestant in Series 78.

He was a professional golfer who played on the European Tour who was known for his unusual one-handed chipping technique. In 2015, he participated in the US Open. In 2018, aged just 33, he announced his retirement from competitive golf due to ongoing wrist problems.