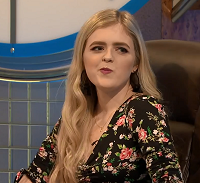 Alyssa Critchley was a contestant in Series 78. She is a maths student at Lincoln University, but was originally from Rotherham.

She also appeared on 10 episodes of series 3 of the BBC gameshow !mpossible, on the same episodes as Ciaran McCarthy. On her fourth episode, she was knocked out after thinking that Des Clarke was a regular host of the show.

Retrieved from "https://wiki.apterous.org/Alyssa_Critchley"
Categories: Contestants in Series 78 | Contestants on other game shows