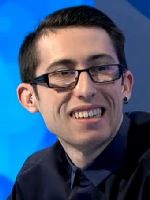 Ciaran McCarthy was a contestant in Series 70. He is an Apterite and is believed to have been the first deaf contestant on Countdown. His score of 104 is one of the highest losing scores in a heat game.

Three years later, he made ten appearances on the BBC quiz show !mpossible, on the same episodes as Series 78 contestant Alyssa Critchley, with whom he would appear on Tenable on ITV on 21 September 2022, as part of the 'Buzz-in Buddies' team.