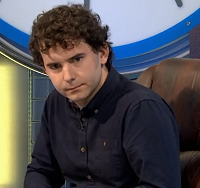 Noel McIlvenny was an octochamp in Series 77, the fourth to be crowned in that series in fewer than two months, and a participant in Championship of Champions XV. He is a Maths teacher from Belfast. He is also an Apterite.

McIlvenny debuted on 15th August 2017, outrunning Sarah Capperauld 83 – 30. He achieved a further seven clear victories with an octototal of 793 points and a high score of 120, showing exceptional skill on the numbers rounds, where, when solving his preferred four-large selections, he frequently ascended into intermediate totals in the thousands or tens of thousands before dividing down again. During his heat run he thrashed previous Series 26 semi-finalist Chris Feetenby, winning 96 – 21.

He eventually returned for the Series 77 finals in December as the #4 Seed. There, he faced by coincidence, another Apterite, Irishman and teacher, Eoin Jackson who was the #5 Seed. The quarter-final game he played was a very close one, with both of them managing to spot two niners, LOCALISES and MONRADITE in the process. However, it was him who just won by two points with a score of 111 – 109 after the crucial conundrum, SUSIFENNT was left unsolved. McIlvenny then appeared in the immediately following game, his semi-final against #1 prospect Tom Chafer-Cook, and while he made a strong score of 83 here, it proved to simply not be enough against Chafer-Cook as the latter achieved the highest score of the series and ultimately came in just one point short of a max game. However, he showed off his numbers skill again on the final numbers round before bowing out in his first defeat.

McIlvenny returned to Countdown in 2019 for the Championship of Champions XV, where he played fellow Apterite Philip Aston in the last first round match of the tournament. He was eliminated by a score of 103 – 89, mainly due to Aston pulling away early on with his findings of TOLUENE and ROTAMER. Nonetheless, he maxed all the numbers rounds, including his use of the '937.5 trick' in the final numbers round. Aston praised McIlvenny as "the best 4-large player ever."