Chris Feetenby in her semi-final appearance... 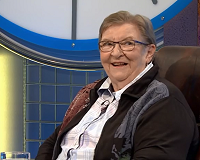 She won 5 games in her original run to qualify for the finals as #3 seed. After an easy win over Theresa McKeown in her quarter-final, she was deposited by eventual champion Andy Bodle.

In 2017, twenty-four years after her first run, Feetenby reappeared on Countdown in Series 77; unfortunately, she was defeated by Apterite Noel McIlvenny, scoring her lowest total on the show despite playing a longer format.