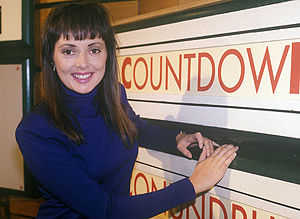 This series marked the debut of the brown set, which was only used for two years. The Countdown clock music had also changed to its present version.

Series 18 ran from July 1989 to October 1989. The eighteenth of 53 series presented by Richard Whiteley, it was won by Rajaretnam Yogasagarar.

This series saw the change of letter tiles to a new red and white design as well as a new set. After several episodes had been recorded, someone realised that this would cause problems for epileptics. An attempt was made to record all the shows again with the original contestants and different tiles, but this caused issues as some were no longer available. This resulted in some shows, notably in the series finals, still having to be screened with the problem tiles.

This series was also the first to feature Carol Vorderman as the letters hostess; previously, she had only been the arithmetician.

Numbers after "+" signs in the Wins column represent drawn games.
Between Series 3 and Series 20, players were ranked by total number of points, including winning and drawing scores, but not losing ones.