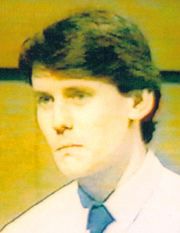 Jonathan Anstey was a semi-finalist from Series 18. He was a 28-year-old civil servant, originally from Dudley, West Midlands, but living in South London.

Beating Tom Dudley in his first appearance, he won seven more games and drew another to become an octochamp and #1 seed for the final rounds. He beat Margaret Budden in the quarter-final, but lost to Mandi Hale in the semis. Anstey later returned for Championship of Champions V, but was beaten in the first round by Gino Corr.

He was also a top Scrabble player.