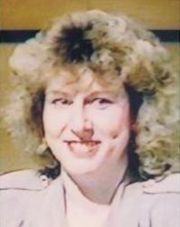 Mandi Hale was the runner-up of Series 18.

She first appeared toward the end of the series, winning 5 heats before losing to Mark Cooper. She returned for the finals as #5 seed, and beat Derek Stuart-Clark in the quarter-final and octochamp Jonathan Anstey in the semi-final. The final against Rajaretnam Yogasagarar went to a crucial conundrum, but Hale was pipped at the post and ultimately had to settle for series runner-up.

Hale returned for Championship of Champions V, but was knocked out in the first round by Lindsay Denyer.

In 1996, Hale played in the Supreme Championship, where she was pitted against Brian Hudson in the first round. The game was very close, with Hudson pulling ahead at first but Hale evening up the score with BUSIEST. She then correctly reached the 381 target in the final numbers game to gain a ten-point lead. However, Hudson correctly solved the conundrum to set up a tie-break. LUNACYINN was revealed and it was Hudson who buzzed in with the correct answer to defeat Hale 58 – 48.