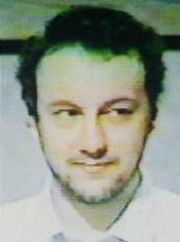 Evan Simpson on the show

Evan Simpson was the runner-up of Series 17.

He first appeared the day after Irish wunderkind Tim Morrissey completed his octochamp run, and won five games before losing to Cathy Bland by a mere two points. He returned for the finals as #4 seed, and heavily beat Len Marshall in the quarter-finals before upsetting the formbook and beating Tim Morrissey in the semi-finals. However, a string of disallowed words in the final meant that Simpson lost the game, and the series, to Lawrence Pearse.

Simpson did not play in Championship of Champions V, but did return for the Supreme Championship in 1996. In the first round, he beat Pete Evans in a "Battle of the Evans", 28 – 50. The game wasn't very close, as Simpson made impressive finds of BAYONET and MEMORIES and only failed to unravel WAGLINESS at the end. In the group semi-final, he played Clive Freedman. The players equalled each other in every single round, including the conundrum PINFLYCAP, which went unsolved. This left Simpson and Freedman drawn 58 – 58. However, Freedman prevailed in the tie-break conundrum, and Simpson's 11th Countdown appearance was his last.

He is also a Scrabble Grandmaster, and is the 1999 National Champion.