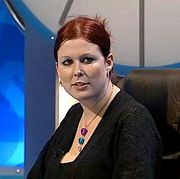 Heather Badcock was a contestant in Series 62.

Her boyfriend is Apterous regular and c4countdown contributor Matt Morrison, who never stops going on about her in 80% of his posts. He must see her as quite a catch.

In 2012, she appeared on The Chase, along with Series 18 runner-up Mandi Hale.