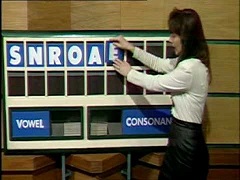 A screencap of the letters tile style seen in Series 19, taken from Episode 980.

Series 19 ran from January 1990 to March 1990. The nineteenth of 53 series presented by Richard Whiteley, it was won by Michael Wareham.

To date, Series 19 is the only series in which there were more women than men in the finals. This series and Series 20 are also notable for having used an unusual font, featuring much thicker text than before, on its letters tiles; by Series 21, this had been replaced by the modern tile typeface that remains in use to this day.

Between Series 3 and Series 20, players were ranked by total number of points, including winning and drawing scores, but not losing ones.