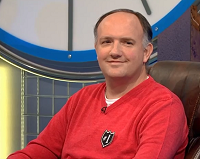 Eoin Jackson with the #1 badge in Series 77.

Eoin Jackson was an octochamp in Series 77.

Beginning his run midway through the series, he prevailed over six-time winner Phil Peel with an impressive début score of 118. This triumph was quickly followed by seven more, and Jackson completed his heat run with a total of 778 points to take the fourth spot on the series leaderboard. Notably, during his run he would wear a numbered badge corresponding with the match number in which he was playing, starting with #1 during his debut, #2 the next day and so on.

He qualified and returned to the Series 77 Finals in December 2017 as the #5 Seed where he faced Noel McIlvenny, another Apterite, Irishman and teacher. His unbeaten streak finally came to an end in the quarter-finals thanks to the crucial conundrum, SUSIFENNT being unsolved, although both players fought each other very well, with him spotting two niners, LOCALISES and MONRADITE as well as beating the former in one of his four large numbers round and by spotting the word TOUCHE.

Jackson is a musician and teacher from County Waterford in Ireland. He has also been a laissez-faire Apterite since October 2010, and as such has taken part in the Apterous Masters 2011 tournament, and one or two online tournaments since. His first foray into real life competitive play was at Ireland's inaugural CO event, Co:Dub 2015, where he finished 15th out of 27 players. He also plays tournament Scrabble.