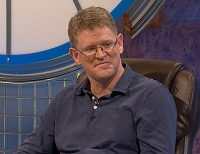 Dougie Mackay was a finalist in Series 78 and a participant in Championship of Champions XV.

Mackay started his run by defeating one-time winner Luke O'Neill easily and obtained his first century. His journey was not smooth all the time, having to face three crucial conundrums, two of which he survived including one which was a close shave after Apterite Andy Christley blanked out on MRGOTNINE (Mr. Mackay got that one though). Alas, it all came to an end on the third one on his eighth game when his final preliminary opponent, Mac Walker buzzed in on DEFTCREEP in a second, not only ending his preliminary run with a defeat, but his chances of becoming an Octochamp as well. However, Mackay's total of 759 points meant that he achieved the highest ever total for a seven-time winner, surpassing Steve Baines' record of 758 from Series 57, as well as the then second-highest total for any non-octochamp after fellow Series 78 contestant Philip Aston's 760 from just seven games.

Mackay's successful heat run also guaranteed him the #6 seed spot for the Series 78 finals, and he returned in June to take on the unbeaten octochamp Chris Thorn in his quarter-final. Here, he proved to be on impressive form, outplaying Thorn in both of his six-small selections and spotting the nine-letter word DOVETAILS to seal a 97 – 68 victory. Mackay next faced Apterite Philip Aston in the semi-finals; although both players put in strong efforts on both the letters and numbers, Mackay ultimately could not quite match Aston's scoring power, in large part due to the latter player's early spot of MONRADITE, and the Apterite prevailed 98 – 76 to qualify for the Grand Final.

Mackay participated in the Championship of Champions XV in January 2019. Here, he faced the Series 73 runner-up and 6-small numerist, Matthew Tassier, in the third preliminary round of the tournament. Tassier broke away on both of his numbers selections and won fairly comfortably, though Mackay's solution to the conundrum HOOPERMEN did deny Tassier a century.