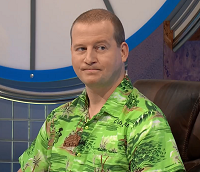 Chris Thorn was an octochamp in Series 78.

He started his run in the ninth show of the series, scoring 90 points out of a record 175 available. This was followed by a century, and two crucial conundrums: his first against Robin McConnell in the fifth game, and his second against Apterite Sam Prouse in the sixth game, which saw Thorn fight back from 23 points down. Thorn wrapped up his run with a personal best of 119 to become the first octochamp of the series.

Thorn's successes in the preliminaries assured him the #3 seed spot in the series finals, and he returned in June for the quarter-finals to take on seven-time winner Dougie Mackay. However, here he finally came unstuck, picking six small in both of his numbers selections and being beaten by Mackay in both cases. Mackay went on to seal victory with the nine-letter word DOVETAILS, relegating Thorn to his only defeat to date.