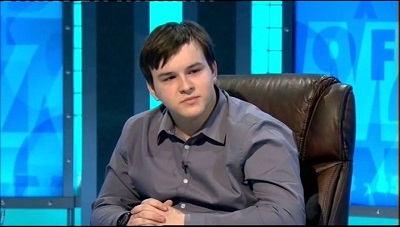 Rhys Benjamin in his third game. 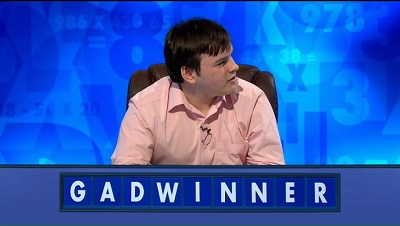 Rhys Benjamin solving the conundrum in his first game.

Rhys Benjamin (born 26 August 1998) was a contestant in Series 73. He was from Harrow in London, and was aged just 16 at the time of his appearances.

Benjamin first came to prominence as a member of the online community, and attended CoLei3, CoLei4, COLIN X and COLIN XI prior to his television debut.

In 2015, five years after joining c4countdown, Benjamin finally appeared on the show on the very first programme of Series 73. Playing returnee James Judge, Benjamin never took the lead during the game, with him being 16 points behind Judge at one point. However, seven crucial points on the final numbers game took the game level, and Benjamin unravelled GADWINNER in five seconds to return to Harrow with a teapot. He went on to win another 4 games hereafter, amassing a total of 484 points (not including the GADWINNER solve, which was actually a tie-break) across six shows to equal the number of wins needed to qualify for the finals. However, his total was exceeded by Matty Artell's 541, preventing him from entering.

Benjamin has an annoying habit of getting conundrums almost right but getting stems, prefixes and suffixes in the wrong order, including JAILBAKER, SPONDERED, and in the first series of ZoomDown, SNOGCRAFT. In his two Dictionary Corner appearances on ZoomDown, he made a point of reading out every alternative maximum-scoring word rather than selectively choosing the best ones.

Outside of Countdown, Benjamin attempted to beat the World Record for travelling to all the stations on the London Underground in 2013, a record previously held by former contestants Jack Welsby and Steve Wilson. He also enjoys motor racing and football (in both cases, supporting the rivals of Philip Aston: namely Nico Rosberg and Fulham respectively), as well as cricket. He is also a Conservative Party activist, and appeared on BBC News in 2020 discussing lecturers' strikes.