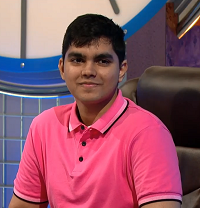 Jasamrit Rahala was a finalist in Series 84. He was an A-Level student from Slough. Prior to Countdown, he appeared on Child Genius in 2015 and Britain's Brightest Family in 2019.

Rahala won a very close debut match on 18 October against one-time winner Tamsin Macdonald Johnston, after an unsolved crucial conundrum eluded both contestants. The following day, he found himself 11 points down with two rounds remaining. However, after Andrew Adams was too slow to declare the last step of his method in the last numbers game, Rahala forced another crucial conundrum which he quickly solved. A personal best of 115 followed, before achieving four more wins which included another solved crucial conundrum. However, on his eighth appearance, he missed a crucial conundrum while being six points behind, narrowly missing out on becoming an octochamp. But, with seven wins and 727 points under his belt, Rahala still managed to qualify for the finals, and entered the finals as the number 6 seed. He played against number 3 seed Florence Cappleman-Lynes where both players started level until Florence broke away, and Rahala was relegated to another defeat. He obtained an overall total of 789 points in his run.