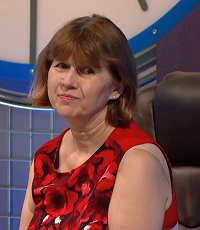 Tamsin Macdonald Johnston, 14 years after her first appearance, in Series 84.

Tamsin Macdonald Johnston was a contestant in Series 56 and Series 84. In her first appearance she was known as Tamsin Johnston; in her second, she became the contestant with the longest name, containing 23 letters in total.