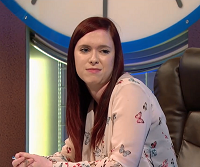 Rachael Montgomery was a contestant in Series 84. She was an Accounts Clerk from Coventry. She is also an Apterite.

Prior to her Countdown debut, Rachael became the first tetrachamp of ZoomDown Series 4. Adam Beach, the first person she played on television, also became a tetrachamp in the same series, but was unable to participate in the series finals. She returned for the ZoomDown series finals in December where, after wins over Gabriel Thallon and Paul Nixon, she made it to the Grand Final to play against Ronan Higginson. The scores were kept level until Ronan risked coatage ☓ and got one away on the following numbers game, allowing Rachael to break away. Ronan came back into striking distance with COWRIES, but neither player could unscramble the festive MADCAROLS into RASCALDOM. The scoreline was left with Rachael having an 8 point advantage, making her the first female champion of ZoomDown.

Rachael came back on the show for the Championship of Champions, surprisingly in a rematch against Paul. She first lead 10 points ahead right before the first break started, but Paul pulled it back with the spot of PRASKEEN. With a two-point difference going into the conundrum of REMATCHGO, it was Paul that solved it into HECTOGRAM in 7 seconds, giving Rachael her first defeat. However, Nixon was unable to participate in the quarterfinals so Rachael advanced.

Rachael came back on against Luke Johnson-Davies in place of Paul, but she couldn't keep him behind. Luke beat Rachael on only three rounds, leaving the scores at 92 – 134, with Luke advancing.