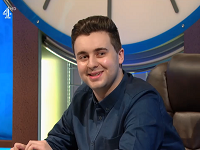 Adam Beach was a contestant in Series 84. From Durham, he is also an Apterite and has a YouTube channel and website dedicated to Countdown, demonstrating graphic design.

A week after his episodes were broadcasted, he appeared on ZoomDown Series 4, and became a tetrachamp with 371 points. However, he was unable to participate in the series finals.