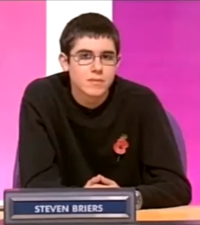 Steve Briers in his second game... 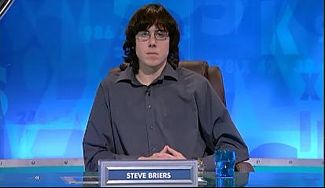 ...then two years later in the grand final of Championship of Champions XIII against Charlie Reams...

...and him again in the 30th Birthday Championship four years later.

Steven "Steve" Briers was an octochamp in Series 55, the winner of Championship of Champions XIII, and a participant in the 30th Birthday Championship. During his Series 55 appearances, he was a student at Taunton's College from Southampton, Hampshire, and is most renowned for his bizarre style of solving numbers games.

Briers first appeared on 3 November 2006, beating Richard Woodward 76 – 62. He vastly improved and hammered Dean Rowley 136 – 41 in his second game, setting the then fifth-highest ever score, the then second-highest ever winning margin in Countdown history, and the highest score of the series. He won six more games to become an octochamp and the No. 1 seed, amassing a total of 843 points. However, he was defeated in the quarter-finals by Phil Watson; the only time to date in which a No. 1 seed lost a quarter-final match under the 15-round format.

Despite not making past the quarter-finals of his series, Briers was selected to return for Championship of Champions XIII, beating Debbi Flack in the first round, partly thanks to the nine-letter word ANTIPODES in the first letters game.

In the quarter-finals, he faced David O'Donnell, who was unbeaten with 12 wins from 12 games. The scores were close all the way, until Briers spotted the nine-letter word PESTICIDE when O'Donnell only had a seven. The players continued to score in every round, until the conundrum, where Briers led by 18 points. O'Donnell solved the conundrum in 0.5 seconds, but it wasn't enough as he lost 118 – 110 to Briers, one of the highest ever losing scores.

In the semi-finals, he faced Nick Wainwright in another close game, including a brilliant six-small numbers solution from Wainwright. However, Briers was five points into the lead going into the conundrum FCRAVIOLA, which neither player solved, so it was Briers that went through to the grand final.

In the grand final, he faced Charlie Reams. Reams started with LEPTON while Briers had OPULENT for seven. Briers maintained this lead until he had reenact ☓ disallowed. Briers then took the lead, first with SNOOZED, then another seven points when Reams went wrong on the numbers. A seven, a six and a five for both players meant that Reams had to beat Briers on the final numbers game to force a crucial conundrum. However, Reams declared nothing, and Briers declared five away. Briers had won the tournament, and just the conundrum remained. The conundrum was ELITEBOUT. Briers first buzzed in with libouette ☓ which was wrong, and then comically, Reams buzzed in with GANDISEEG, referring to Richard Brittain's guess at the conundrum in the first round of the tournament.

Briers returned to Countdown in 2013, as one of 41 contestants taking part in the 30th Birthday Championship. He lost his only match against Series 61 runner-up Andrew Hulme by a score of 113 – 74.