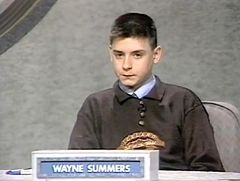 Wayne Summers in his debut against Bernadette Battman.

Wayne Summers was the champion of Series 24 and the winner of Championship of Champions VI, earning him reputation as one of – if not, the – greatest non-octochamps in the show's history.

He was from the Channel Islands and first appeared at the tender age of 15 in the first heat of Series 24, beating fellow newcomer Bernadette Battman 73 – 41 (the champion's chair having been vacated at the end of Series 23). Summers won four more heat games, including a close game against Deborah Rettie that was decided by a sudden death conundrum, before losing to his own father, Martin, 64 – 54 in his sixth game.

Summers' performances were enough to see him return for the final rounds as #3 seed, and after two close games against Ged O'Toole and Alan Payne in the quarter- and semi-final respectively, he found himself facing #8 seed Fiona Davies in the final. After yet another close-run game, Summers outran Davies 67 – 47 and became the youngest ever series champion, a title he would hold for almost fifteen years until Conor Travers won Series 54 aged 14.

Summers returned at the start of 1993 for Championship of Champions VI, where he beat Phil Jordan and Fiona Willis on his way to the final against Chris Waddington. Summers won another close match by a score of 79 – 67 to become the sixth Champion of Champions.

Summers returned to Countdown one last time three years later, at the age of 20, for the Supreme Championship, where he received a seed into the group semi-finals. Unfortunately for Summers, he was defeated in his first game 59 – 39 by Hilary Hopper after a series of unfortunate missed words.

* includes 10 points from a tie-break conundrum
Retrieved from "https://wiki.apterous.org/index.php?title=Wayne_Summers&oldid=133998"
Categories: