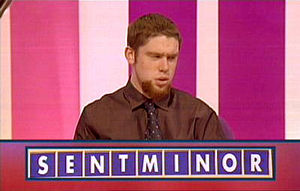 Martin Gardner in his first game.

Before being a contestant on the show, he ran the Countdown website Countdown Update UK. After finding the address on Ben Wilson's website, he applied for the televised show.

Before appearing on the show, Gardner ran the Countdown Advance on Gevincountdown as well as the UK Net Gameshows Yahoo! forum. He also ran Countdown_Update_UK which included about 100 pages dedicated to Countdown, including games scores, playing tips and a factfile. He was also a moderator of Gevincountdown until the C4countdown forum replaced it. Gardner was invited to an audition at the end of 2002.

After failing the audition, he was invited to the studios as a replacement after John Davies became an octochamp, achieving a top score of 107, and a low score of 72.

Gardner returned to the Series finals as #2 seed, behind John Davies. Gardner beat Peter Jeffery in the quarter-final 101 – 64. Gardner faced David Wilson in the semi-final and was ahead after 3 rounds when he beat David with UPRATED but was pegged back in the next round with MORGUES. After this round, Wilson scored in every round apart from the conundrum and won the game 98 – 86, although it was Gardner that solved the conundrum SANDSTORM just before the end of the 30 seconds. Gardner never got a nine-letter word during his 10 appearances. He averaged 93.3 points per game.

Gardner was not invited back to the 12th Champion of Champions tournament, possibly due to an alleged dispute with the producer Damian Eadie. Since appearing on Countdown, Gardner has taken up Scrabble at first in English and then in French, and represented the United Kingdom in the French World Championship in 2006, finishing 33rd out of 54 competitors. He's also appeared at the Edinburgh Countdown Club and came 4th out of 24 in the first COLIN event.