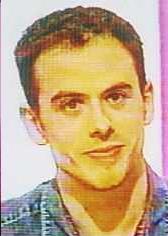 Jon Corby, looking very different to what he is now (pictured below). 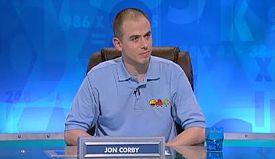 Jon Corby in his game against Charlie Reams, still looking very different to what he is now (not pictured).

Jon Corby was a octochamp in Series 54 and a semi-finalist in Championship of Champions XIII.

He won all eight of his heat games in impressive fashion, amassing an impressive 856 points and returning for the final rounds as #2 seed. He beat Christine Armstrong impressively in the quarter-final in a low scoring contest, but lost to eventual runner-up Matthew Shore in the semi-final on the crucial conundrum GASPFROWN which Shore turned into FROGSPAWN. As the competitiors for Championship of Champions XII had been decided before Corby's octochamp run, he did not participate, but competed in the Championship of Champions XIII.

In his first round match, he beat Richard Brittain and held him to just 52 points after his famous conundrum guess of GANDISEEG. In the quarter-final, he faced Jonathan Coles and again won comfortably without facing a crucial conundrum. In the semi-final, he faced Charlie Reams. Reams put on a strong performance, scoring in every round apart from the conundrum, including five eight-letter words in a row - a Countdown record. Corby couldn't keep up, and eventually lost 110 – 76. Corby also used his Countdown run to raise money for charity.