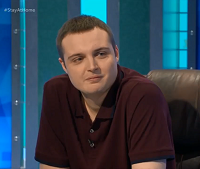 Tom Hargreaves was an octochamp and runner-up in Series 47, and was a contestant in the 30th Birthday Championship.

At 16 years old, he was one of the youngest octochamps in the game's history, and the first one under the 15 round format. He ran off the first eight heat games of the series with a then record score of 850 — 106.25 points per game. It included a crucial conundrum 103 – 92 against Elfie Winterton. Unfortunately, Winterton needed to write the conundrums down before she could solve them, and Hargreaves got it in just a few seconds, before she had written it down. In the quarter-final, he faced Mike Pullin who held him to a crucial conundrum, mainly thanks to the word HUNKIEST, but it was Tom that solved SIDSDIMES first. In the semi-final, he faced Kevin Thurlow and Hargreaves beat Thurlow, as he scored maximums in every round but two, although he couldn't solve the conundrum OUTERSUNS he was in the final with a score over 100.

There he faced #1 seed Chris Wills and the final turned out not to be a classic as Hargreaves missed a numbers of words and was not able to beat Chris on the conundrum. Wills took the game with a score of 110. Hargreaves was invited back a year later to take part in the Championship of Champions XI where he beat John Rainsden and the unbeaten Ben Wilson to qualify for the semi-finals against Graham Nash. Hargreaves looked off-par against Nash with three disallowed words, including RESCALING when Nash had the only valid 9, CLEARINGS. This ended Hargreaves' run as he finished with 12 wins out of 14, his only two defeats were against two Series champions, Chris Wills and Graham Nash.

He returned to Countdown in 2013, as one of 41 contestants taking part in the 30th Birthday Championship. He won his first match against Series 62 runner-up Nicki Sellars by a score of 117 – 57, before losing to the Series 58 champion David O'Donnell in round 1 in a game that ended 111 – 86.