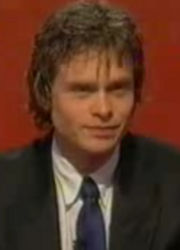 Steve in the Series 46 final.

Steve Sandalls was the runner-up of Series 46.

He won 5 heat games before losing the final 6th game by just 4 points. He also racked up a score of 109, then the highest in the history of 15-round Countdown, surpassed a couple of weeks later by Simon Cartwright. He returned for the finals as #6 seed behind 5 Viscounts. He beat Loz Sands in the quarter-final on a crucial conundrum before beating Brian Capper who had beaten the #2 seed in his quarter-final. In the final itself he faced #1 seed Ben Wilson. The scores were tight, but Steve went ahead after Ben made a mistake on the 3rd numbers game. He was one point ahead on the conundrum, but it was Ben that solved ASSISTANT to win the Series. Rather controversially, Steve was not invited back to Championship of Champions XI, instead his place was given to Loz Sands, despite Steve eliminating her in their quarter-final.