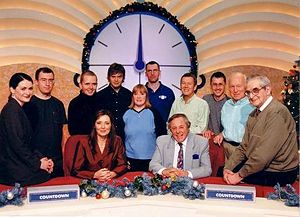 The Series 46 finalists with the presenters and Dictionary Corner.

Series 46 ran from 24 September to 25 December 2001. The forty-sixth of 53 series presented by Richard Whiteley was won by Ben Wilson. As this was the first series in the original version of the 15 round format, players were limited to six wins in the heats, not the traditional eight. While the new format was retained, the six-game limitation was reversed, so this was the only series to feature six-and-out winners known as viscounts. This was also the first series to feature Teatime Teasers.

In the finals, the No. 1 seed was Ben Wilson, one such viscount, who began by defeating the No. 8 seed Simon Cartwright. Phil Wass had to face Brian Capper, the player that Wass had already beaten during the heats. This time Capper got his revenge as he beat Wass on the crucial conundrum ACROBATSD which gives BROADCAST. Loz Sands also had to face a crucial conundrum against Steve Sandalls, but it was Sandalls that unravelled VERBOHIRE to reach the semi-finals. Paul Ryan completed the quarter-finals by beating unbeaten player Ian McMenzie 90 – 69.

In the semi-finals, there was a classic game between Wilson and Ryan as Paul Ryan led after 12 rounds. In Round 13, Wilson spotted the eight-letter word RIVULETS and beat Ryan on the six small numbers game, which meant that Wilson led by 11 points with only 10 points remaining for the conundrum. It was academic, as Wilson spotted the conundrum READYSETY in 1.25 seconds. The second semi-final was another close game with Steve Sandalls triumphing over Brian Capper 99 – 84.

The final, shown on Christmas Day, was another close game and included another crucial conundrum. After nine rounds, Wilson and Sandalls had equalled each other in every round, until Wilson chose his preferred six small numbers and took a ten point lead. He extended his lead with BONNIES, but Sandalls clawed his way back with ACCEPT, GYRATED and five points on a very difficult final numbers game. This left the game poised at 75 – 74 with just the conundrum to go. Wilson solved the conundrum SANTASITS in three seconds to become the 15 round era's first series champion, unbeaten with nine wins out of nine.

This series also introduced a new camera-angle sequence during the letters rounds; the camera angles shot on the contestants, clock, studio and Dictionary Corner changed every two seconds instead of the traditional four seconds, while retaining the zooming-in on the bottom of the clock in the final eight seconds. The sequence reverted to the traditional four-second change in Series 48.