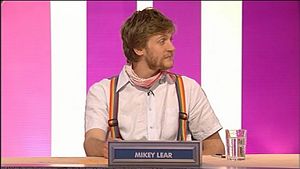 Mikey in his first show. He won. 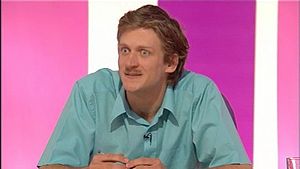 Mikey in his eighth show. He lost.

Mikey Lear was a finalist in Series 57.

He first appeared in July 2007, beating Rory Miller. The show started well, then Lear came into view. His choice of braces, neckerchief and truly extraordinary facial hair caused disquiet in the audience, many of whom tried to demand their money back. Amazingly, Lear won his first show, despite Rory's brave choice of an unknown 3-letter word. He has since consistently confused Des O'Connor with his risqué 7s. Lear's facial hair is reported to be receding show by show. Lear is in love with Susie Dent. His proposal of marriage was gratefully accepted by the lovely Susie after his first win, but only on condition he won the series. Which, obviously, he didn't. He was thrashed by Craig Beevers, who is astonishingly good at Countdown.

Mikey currently holds the Guinness World Record for the longest hug (25 hours) which he set with his friend Sanderson Jones in March 2013.