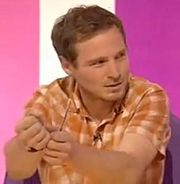 Rory surrenders himself to the producer for crimes against comedy.

Rory Miller was a contestant in Series 57.

One interesting fact about Rory was that he supposedly found a donkey in the middle of the desert, and for hitch hiking 10,000 miles.

He was most notable for: getting the giggles while asking Carol for his letters; stopping at eight letters and then when Carol said, "you have to have another vowel" saying, "oh, okay...consonant, please"; and for declaring a three-letter word and then saying that it wasn't actually a real word when asked. He also asked that Carol explain the rules of the numbers game to him just as he was picking his numbers.

He wrote a full account of his Countdown experience and posted it on his MySpace page. It can also be read here He also has a YouTube channel: here