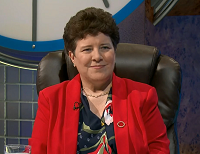 Monica Quadri was a contestant in Series 80. She's an Executive Personal Assistant from Motherwell in Scotland.

Two of Quadri's relatives had made appearances beforehand on the show – her sister, Jane Burns, was a contestant in Series 79, and her cousin, James Kennedy, who was an octochamp and finalist in Series 77.