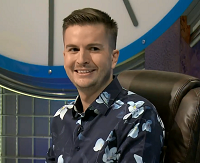 Arran Cleminson was a contestant in Series 80. He's a Data Scientist from Liverpool, originally Kent. In his 3rd and most recent game against Elliott Mellor, Cleminson scored 40 points, all of which were obtained during the four number rounds. This makes him the first daily champion to lose all letters games during a show.