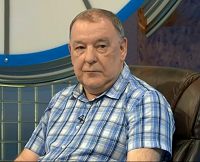 James Kennedy, 17 years after his first appearance in Series 77.

James Kennedy was an octochamp in Series 77 who débuted in Series 43.

A retired teacher from Scotland, Kennedy first appeared in 2000 where he blundered on a crucial conundrum and lost by 18 points. He returned 17 years later in another close game. He got a crucial conundrum wrong again, but this time wasn’t costly as he was 7 ahead and Alex Smith comically drew a blank. Kennedy followed with his only century of his run and scored no lower than 83 in his remaining six wins, including a 1-point win over Rania Abdul-Wahab.

As a result of his octochampdom, Kennedy returned for the series finals in December, but in a long and strong series, his total of 736 points was only enough to make him the #7 seed. Despite this, he ran #2-ranked Apterite Bradley Horrocks very close in his quarter-final match, leading him by four points going into the crucial conundrum. However, Horrocks came through with a solution to GYRATIONS, and the game's result would ultimately remain true to the seed table.

Two of Kennedy's cousins have subsequently appeared on the show since his appearance – Jane Burns in Series 79, and Burns' sister Monica Quadri, who appeared in Series 80. Less than 3 and a half years after his last appearance, he was the audience member that solved the conundrum on 2 April 2020.