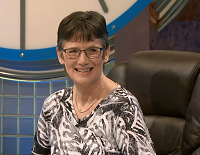 Maggie Barlow was an octochamp in Series 80. She's a Retired Librarian from Lutterworth in Leicestershire.

Barlow first appeared on 7 March 2019 and won against John Ashcroft by two points. Her run from then on was more consistent; she earned seven more victories and six centuries to become the third octochamp of the series and qualified to return for the finals in June 2019 as the number 4 seed. Barlow put in a strong performance in the quarter-final, outclassing Fiona Titcombe on the third and fourth numbers rounds and securing a semi-final spot with a quick solution to the crucial conundrum PARALARCH. Barlow's only defeat to date, however, came in her semi-final against number 1 prospect Elliott Mellor, though she did achieve a very commendable 80 points.