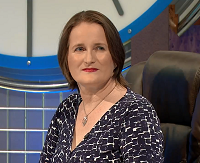 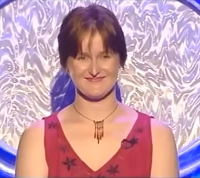 Fiona Titcombe was an octochamp in Series 80. She's a Freelance IT Developer from Blackwater, Hampshire. She is also an Apterite and a current co-presenter on ZoomDown.

Titcombe made her debut against Andy Myerson on April 19th 2019. She won the game with 82 against Myerson's 68 points. She followed this with 7 more decent victories with one century in her sixth heat game. She rounded off her heat run with 720 points to become the 5th octochamp of Series 80.

Titcombe returned for the series finals in June 2019 as the number 5 seed, where she kept up steadily with the pace of #4-ranked Maggie Barlow in the quarter-finals; the score of the match remained deadlocked until the third numbers game. Titcombe then spotted SAILORS, which proved to be enough to set up a crucial conundrum; unfortunately for her, Barlow beat her to the buzzer on PARALARCH, relegating the #5 player her only defeat.

Titcombe was the audience member that solved the conundrum FILMBEGAN with the answer FLAMBEING on 9 December 2019.

Titcombe made her Co:Event debut at Co:LON 2019. She was due host Co:LON 2020, her first hosting of a co-event, in May 2020 alongside George Armstrong, but it was ultimately postponed due to the Coronavirus outbreak.

On 28 July 2001, Titcombe appeared as a contestant on The National Lottery: Winning Lines on BBC One.

Retrieved from "https://wiki.apterous.org/Fiona_Titcombe"
Categories: Contestants in Series 80 | Teapot owners | Octochamps of the 15 round era | Contestants on other game shows | Finalists