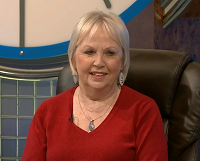 Julia Wilkinson in Series 80, 17 years after her first appearance.

She made her debut on 7 June 2002, defeating John Mitchell towards the end of Series 47. Wilkinson managed 7 wins before the series finals took over; incredibly, those 7 wins weren't enough to secure passage into the finals, so the unbeaten Wilkinson carried her bat over to Series 48. She got the series off to a fine start, affirming her status as octochamp with 122 points in the series opener, making 744 points total.

She returned for the finals as #5 seed, facing Danny Hamilton in the quarter-finals. Here her run on the show ended, as Hamilton beat her by a score of 105 – 70.

In March 2019, Wilkinson returned to Countdown for a second run, becoming the first 15-round octochamp to have done so. However, she was beaten here by Maggie Barlow.