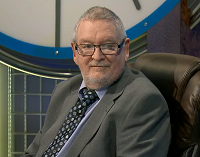 John Hadfield, 32 years after his first appearance, in Series 80.

He survived a crucial conundrum on his début, and went on to accumulate 429 points to qualify for the finals as No. 3 seed. He faced Frank Houston in his quarter-final match, where he built a 10-point lead after the first three rounds. He then fell to 5 behind five rounds later after missing an available T extension of FUNNIES and blundering in the last numbers round. Houston eventually solved the crucial conundrum UNCLEPEAT to upset Hadfield's run.

Hadfield returned for a second debut in 2019, but unfortunately ran into Elliott Mellor who ended with the highest ever score of 152 points on Countdown.