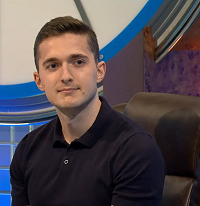 Louis Ross was a octochamp in Series 83. He's a Marketing Director for a Card Company from Barnet, London. He is also an Apterite.

Ross first appeared on Countdown on 28 May 2021 against Richard Brookwell, winning with 88 points to Brookwell's 75. From here, Ross continued a very strong run, with 4 scores in the 90's and a personal best of 112. In his eight game, his opponent Jason Butler came close to unseating him, but after Butler messed up the last numbers game, Ross solved the crucial conundrum to retain the lead and become an octochamp, the first since Luke Boynton and the last under Nick Hewer, with an overall score of 738 points.

Ross returned for the series finals as the No. 4 seed, despite the fact that he has 6 more points than No. 3 seed Adam Latchford, against No. 5 seed Coral Heath in his quarter-final on 22 June. He played a close fought contest, with Heath beating him on the second numbers round and following letters round. However, after a gamble by Heath on the final numbers game failed, Ross won the quarter-final with 88 points to qualify for the first semi-final against Boynton.

In the semi-final, Ross played a close game, but fell behind early on. After Boynton had a nine disallowed, Ross closed the gap to within 7 points, but Boynton confirmed his spot in the final thanks to the final numbers game and Ross took his first defeat. Ross amassed an overall total of 902 points in his series run.