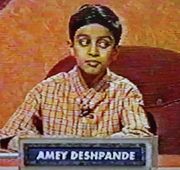 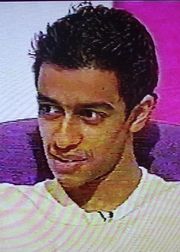 Amey Deshpande was a contestant in Series 42 and a finalist in Series 56.

From Shropshire, he first appeared in Series 42 aged 10 and lost to John Snedden. He was invited back aged 12, in Series 47 as part of the junior Countdown tournament, where he lost 66 – 44 to the impressive Andrew Hulme. Deshpande was given another go in Series 56 where he ran off eight consecutive games including one century against Gareth Evans, when he spotted the nine-letter word DESERTION and the conundrum to get 102 points. In the quarter-final against Anita Freeland the scores were close but low at 62 – 61, but Deshpande failed to score in any of the next three rounds meaning that the conundrum was irrelevant, but he did solve it and lost 86 – 71.

Deshpande was the first octochamp to be crowned with Des O'Connor as a presenter.