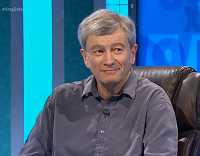 David Williams was a semi-finalist in Series 43 and a contestant in the 30th Birthday Championship.

He first appeared on 23 August 2000, beating Sheila Reid 67 – 41, and won a further seven games to not only become an octochamp and No. 1 seed for the series, but also the highest-scoring octochamp of the 9 round era with an aggregate score of 535, surpassing Harvey Freeman's long-standing record by 12 points. Notably, he solved all 8 conundrums during his octochamp run, and was only the third player to do so after Darryl Francis and Freeman himself.

Williams beat James Sheppard in the quarter-final, but came unstuck against Matthew Turner in the semi-final, losing 57 – 40.

Williams returned in 2003 for Championship of Champions XI, and faced Chris Wills in the first round. Williams led by eight points going into the crucial conundrum thanks to an excellent final numbers game, but Wills' superior reflexes enabled him to buzz in almost instantly, meaning he went through whilst Williams had to leave the competition. However, Williams' losing score of 111 added another record to his list, until it was beaten by Matthew Shore at the following Championship of Champions event.

He returned to Countdown in 2013, just over a decade later, as one of 41 contestants taking part in the 30th Birthday Championship. He received a bye to the first round, but lost his only game convincingly to Series 61 champion Chris Davies by a score of 108 – 58.

His son, Richard Williams would himself make an appearance on Countdown in Series 84.