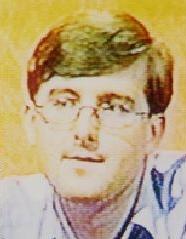 Matthew Turner was the runner-up of Series 43. He is a chess grandmaster and plays for Wood Green.

Turner made his debut beating Andrew Jackson in the 95th heat of Series 43. He went on to play five more heats, never seeming in doubt until his sixth game against Sid Sears. Sears beat him to the buzzer on a crucial conundrum and he lost 51 – 46.

However, Turner was able to return for the finals as #5 seed, and first beat John Harrison in a close quarter-final. He went on to beat the undefeated David Williams in the semis, the turning points being HANKIES and the final numbers game, bringing him to the grand final against Graham Nash. In the final, Turner took an early lead with WINTERS, but offered two invalid words in a row, making him neck and neck with Nash at the end of Part One. However, Turner later slipped when Nash got the 901 target in the third numbers game, and his opponent also solved the final crucial conundrum ANEWREBEL, relegating Turner to the runner-up spot. For reasons unknown, he did not play in Championship of Champions XI.

Interview with Matthew about his time on the show