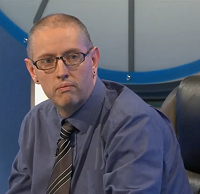 Nick Deller was a contestant in Series 28 and the 30th Birthday Championship.

He returned to the Countdown world 12 years later, to compete in COLIN 2006.

He returned to TV screens in 2013, as one of 41 contestants taking part in the 30th Birthday Championship. He lost his only match against the Series 52 champion Mark Tournoff in a tight game, by a score of 101 – 100.

Deller is also a competitive Scrabble player, and for a number of years was editor of the puzzle magazine Tough Puzzles.