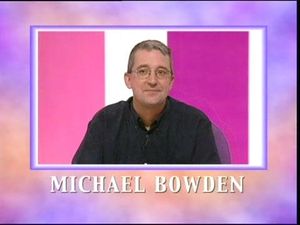 Michael Bowden was a finalist in Series 54, making his debut on 25 January 2006.

Bowden was a model of consistency throughout his run, only twice scoring outside the 90s. His sole century came at the expense of Benjamin Bell, which completed his run as an octochamp. Bowden shares with Kai Laddiman the distinction of having sat in the champion's chair for all 8 of his heat games, due to the fact that he debuted the day after another octochamp.

739 points saw Bowden return as the #6 seed, where he met Matthew Shore. Bowden pushed Shore to a crucial conundrum, but Shore proved too good by unscrambling MOOCHYBEN into HONEYCOMB in 9 seconds.

The following year, Bowden returned to the Countdown world for the unofficial COLIN 2007 tournament.