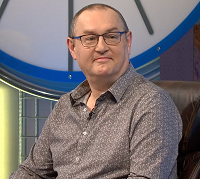 Phil Davies was an octochamp in Series 78 and a participant in Championship of Champions XV. He joined Apterous after recording his heats.

Davies started his run on 5 February, bottoming out at 75 points in his third game, but then climbing to a high of 114 in his seventh. On Valentine’s Day, he missed the conundrum on his final game which denied him a fourth consecutive century and provisional number one seed, but still achieved three centuries in his eight wins to become the second octochamp of the series.

Davies' 757 points netted him a place in the Series 78 finals as the #4 seed, and he returned in June to face former Series 32 finalist Paul Harper. Davies spotted the nine OUTRANGES early in the show and mounted a 42-point lead, but in the second and third "halves" Harper clawed back the deficit until he was nearly within striking distance. Only an evenly matched final numbers round prevented a crucial conundrum and assured Davies a place in the semis, where he was then matched against hotly favoured #1 seed Zarte Siempre. Davies held his own against the top seed, taking the lead in Round 1 when Siempre had disagreer ☓ called off and maintaining the lead through the difficult six-small selection in Round 9. Ultimately, however, Siempre's spots of MURIATES and NOTABLE meant that the outcome of the game was again decided after the final numbers round, with Davies this time suffering his first defeat.

Davies returned to Countdown in January 2019 for the Championship of Champions XV, where he faced Jonathan Wynn in the first preliminary round of the tournament. Here, he kept up very well with Wynn, maintaining a crucial margin, but the Series 73 champion ultimately broke away in the third "half" to prevail 103 – 68.

Retrieved from "https://wiki.apterous.org/Phil_Davies"
Categories: Contestants in Series 78 | Contestants in Championship of Champions XV | Teapot owners | Octochamps of the 15 round era | Finalists