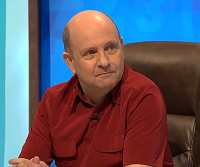 Paul Harper, 22 years after his first appearance, in Series 78.

Paul Harper was a finalist in Series 32 and an octochamp in Series 78.

Harper's eight wins and 739 preliminary points netted him a place in the Series 78 finals as #5 seed, which made him the second contestant to become a finalist for a second time, after Glen Webb. In his quarter-final here, he faced fellow octochamp Phil Davies, and the latter got off to a blistering start to lead 42 – 0 after four rounds. However, Harper went on to mount a strong comeback, narrowing the gap considerably with spots of VIOLATED, OUTWORE and PARKOUR, and Davies sealed victory only after the evenly-matched final numbers round.

Harper was the reserve contestant for Championship of Champions XV.