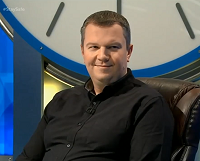 Glen Webb in the Championship of Champions XIV.

Glen Webb was a finalist in Series 23, a contestant in Series 68, an octochamp in 69 and a participant in Championship of Champions XIV.

On his return in 2013, Webb won eight games and accumulated a total of 945 points, notably the highest when not all of the games were a century or higher. He also became the first contestant to have qualified for the finals of multiple series (besides the Supreme Championship and the 30th Birthday Championship). Notably, in his fifth game in Series 68, he scored 141 points, the most ever achieved in a heat game as well as in any game in the new 15-round format at the time.

In the past, champions who were undefeated at the end of the series could elect to either enter the finals or carry over to the next series. At some point the former option was eliminated and all champions must now carry over. Webb's run was the first time the carry-over rule was enforced; had he been able to enter the Series 68 finals unbeaten, he would have been No.5 seed for the series.

Webb returned for the finals as No.3 seed, scoring in every round but one in his quarter-final victory against Jonathan Liew. In his semi-final against No.7-ranked Callum Todd, he nabbed a small lead in the first numbers round, but failed to score in five rounds prior to the conundrum and was defeated by Round 13; Todd would go on to win what turned out to be one of the strongest ever series of Countdown.

Webb returned to Countdown in 2016 for Championship of Champions XIV, where he was knocked out by Tom Cappleman in the opening round despite having spotted three nine-letter words.