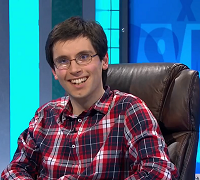 ...and five years later in the 30th Birthday Championship!

Martin Bishop was a finalist in Series 59 and a participant in the 30th Birthday Championship.

He won 8 impressive heat games at the end of the series, including scores of 115, 111, 110 and 109. His final game yielded 83 points, just 12 short of the 95 needed to become No. 1 seed, surpassing Charlie Reams. He therefore returned for the finals as No. 2 seed and breezed past No. 7 seed Lee Simmonds 112 – 64 which set up a mouth-watering semi-final against Junaid Mubeen who'd scored 124 out of a possible 127 in his quarter-final against Neil MacKenzie. The semi-final didn't go to plan for Bishop as Mubeen beat him early on with SPATIAL and ROMAINE. In the later rounds, Bishop looked to be in with a chance when Mubeen has precasted ☓ disallowed (the past participle of PRECAST is PRECAST) but when Bishop had somaine ☓ disallowed, the game was all over, although it was Mubeen that scored on both the final numbers and conundrum.

Bishop was the last octochamp to be crowned with Des O'Connor and Carol Vorderman as presenters.

Bishop was invited to Championship of Champions XIII, but was unable to attend due to external commitments. He instead returned to Countdown in 2013, as one of 41 contestants taking part in the 30th Birthday Championship. After receiving a bye to the first round, he lost his only match against the Series 47 champion Chris Wills by a score of 102 – 99, despite leading nearly all the match.

In May 2010, Bishop attended his first unofficial Countdown tournament, Co:Lon 2010, and followed this up in October with CoLei3. He has subsequently appeared at CoNot 2011 and Co:Lon 2011.

Retrieved from "https://wiki.apterous.org/Martin_Bishop"
Categories: Contestants in Series 59 | Contestants in 30th Birthday Championship | Teapot owners | Octochamps of the 15 round era | Finalists | Contestants on other game shows