MacKenzie on the show. 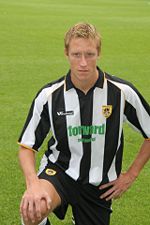 MacKenzie in the strip of his former club Notts County.

Neil MacKenzie was a finalist in Series 59.

Notably, he's a professional footballer who played for Notts County when he appeared on the show. MacKenzie beat the eventual #7 seed Lee Simmonds on a crucial conundrum to take to the champion's chair and rattled off five wins, including top scores of 104 on two occasions, before losing to Katy Turner after she spotted the nine-letter word LACTATION.

MacKenzie returned as #6 seed for the series finals, where he faced #3 seed Junaid Mubeen in the quarter final. Here he was outclassed, losing by 67 points, but taking away a crystal vase for his efforts.