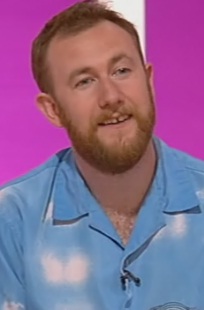 Alex Horne was a finals qualifier in Series 59 and regular Dictionary Corner guest on 8 Out of 10 Cats Does Countdown. Known in comedy for creating and co-hosting Taskmaster and for his band "The Horne Section", he first appeared on Countdown as a contestant in 2008, winning three episodes. He qualified for the series finals in December as the No. 7 seed, but was unable to take part due to comedy commitments. He later returned to the show in 2013, this time as a guest in Dictionary Corner in Episode Cats9, alongside his band "The Horne Section".

He also appeared with his band in 10 other episodes over the course of the next seven years, with his most recent appearance being in January 2020. The band even once stood in for Joe Wilkinson who was "away on holiday" in Episode Cats25.