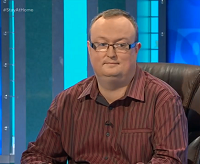 Wayne Kelly was the runner-up of Series 28, and was a contestant in Championship of Champions VII and the 30th Birthday Championship. As of 2021, he is the current chair of the Association of British Scrabble Players.

He made his first appearance on 10 August 1994, defeating Helen Wood 55 – 45, and won a further five games before exam pressures forced him to retire before he could complete a potential octochamp run. He returned for the final rounds as #5 seed, and beat Isabelle Heward and Suzanne Miles on his way to the final. In the final against Damian Eadie, it went straight to the wire with Kelly trailing by a solitary point going into the final, crucial conundrum. Ultimately, it was Eadie who buzzed first, meaning Kelly had to settle for second-best and a clutch of book tokens (which, when dictionary corner guest Michael Parkinson asked what he would do with them, Kelly famously replied he would 'buy some books').

Kelly returned at the start of the next series to participate in Championship of Champions VII, but was knocked out in the first round by Richard Campbell.

Kelly also participated in the Supreme Championship the following year, losing in the first round to Gareth Williams.

He returned to Countdown in 2013, as one of 41 contestants taking part in the 30th Birthday Championship. He won his first match against the Series 56 champion, Nick Wainwright, before losing to the Series 63 champion Jack Hurst in the first round proper, where Hurst scored 143, which was then the second highest score in the show's history.

Since his appearances on Countdown, Kelly has become an avid Scrabble player, achieving Grandmaster status within the Association of British Scrabble Players, which he is a member of, and representing England at the 2007 World Scrabble Championship. He won the National Scrabble Championship in 2011 and organises tournaments.

He appeared on the BBC Two quiz show Eggheads in 2013. He then appeared on the BBC Radio 2 quiz PopMaster in 2017, where he answered every question correctly to beat fellow Scrabbler Karl Kwiatkowski and avoid the "3 in 10" round, automatically winning a radio. He returned to PopMaster again in December of that year for the Champions League round in a bid to qualify for the grand final, but was one point short of making the top two highest scorers. He appeared on ITV’s Tenable on 11 September 2018.